SHORT LEATHER PANTS  ·  MY OWN PANTS

Fabric pockets and waistbands have been renewed with leather material. Defective zips and faded piping have been replaced with new ones. No doubt the pants will outlive their owner. Hans Christian Andersen says in one of his fairy tales: “Gilding fades fast, Pigskin will last.” However, pigskin may be the right choice for chairs, but for clothes, as one expert explained to me, it is too stiff. Of course, all my shorts are made of cowhide.

My favourite trousers for indoors. Acts like a silent friend during meditation sessions. Smooth and tight. I wouldn't allow anyone to try on these trousers. Leather trousers are easily offended like cats. I might not be able to get the zips open at a delicate moment. 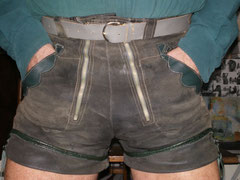 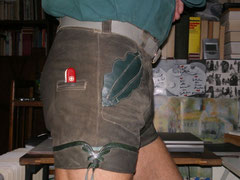 These leather pants represent the classical model for boy scouts with Germanic oak leaf decorated pockets. The typical knife pocket on the right side left no traces when it was removed shortly after purchase in a fit of youthful pacifism. 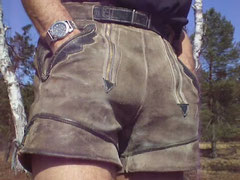 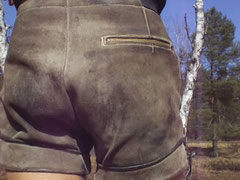 Robust clothing for meadow and forest. Reliable companion in wind and weather. Loves long sessions on trees. The tight trouser legs prevent ants from entering. Beware of the deep and very tight knife pockets! If you have a handcuff key stashed there, you won't get it out when you're tied up... 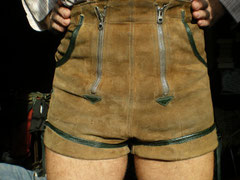 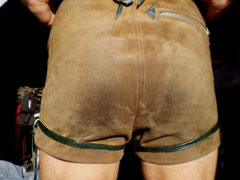 When visiting relatives in the GDR, I wore blue jeans, which were still a taboo in the socialist countries because of their anti-worker character. My cousin strutted around in short black leather trousers. This style was considered more of a luxury in the FRG (West Germany). We boys would certainly have changed our trousers, but our parents didn't agree. So I bought a brand new pair with my East German marks. It was surprisingly cheap. However, I chose it too small and was ashamed to wear the flashy skin-tight trousers. When Grandma's old Singer was repaired, I enlarged my luxury trousers to size 32, giving the shorts a personal touch on the flanks. Anyway, what was quite common among young people in the sixties is indecent today – those highly polished leather shorts are not appropriate in public spaces! But they are very stimulating for introspection during meditative sessions. 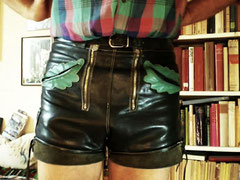 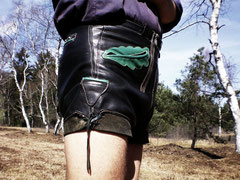 Trade mark Bergfreund  ·  From a schoolfellow 1967

He detested his boyhood shorts

My oldest trousers. The patent mark of the German Reich (D.R.G.M.), which refers to the adjustable waist mechanism, makes it clear that this garment was made as late as 1945, most probably already in the 1930s. The trousers had hardly any signs of use when I got them. They are still like new, as I have rarely worn and do wear them. No matter what age these leather trousers are put on – they look a bit odd in urban life. But the extremely supple and comfortable trousers go well with shady walks in the forest or moonlit nights. 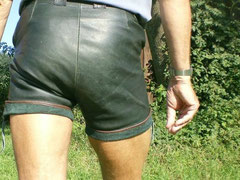 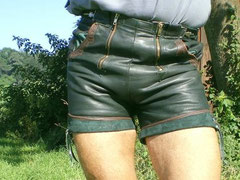 Barter with a fellow bookseller ·

Very comfortable trousers for indoors and outdoors. There is plenty of room inside. The leather reaches above the waist and protects against cold draughts. These clothes have lived with me for many years in France and Spain, almost unrecognised by the local population. Anyone who has never seen leather trousers – except in Germany or Austria – will hardly be able to distinguish them from ordinary trousers at first glance. 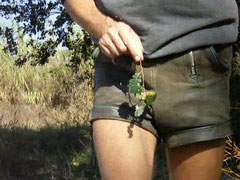 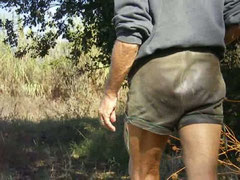 Obtained 1968 from the parents of a schoolfellow

Walter and I were did best at writing class essays. No one could follow us up to Parnassus. Due to a pulmonary disease, he was exempt from sport, as I was because of scoliosis. We did not become really close friends, although it would have been obvious. That's why I don't know much about him. He was an adoptee from an Eastern Bloc country, an unattainably gentle boy, who matured early. The gods must have loved him dearly. They invited him for ever to Parnassus just the day before his twentieth birthday. I keep some of his best school essays. And his leather shorts. 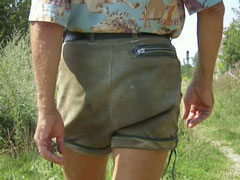 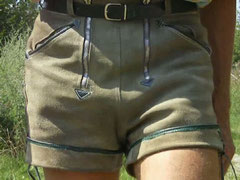 2007 acquired at a flea market in the Lüneburg Heath ·

These typically tedious leather pants had been worn often, when I bought them on the cheap. They lived a shadowy existence among my other leather trousers until I rediscovered them a few years ago. The future photo starlet got leather pockets instead of the cloth ones. Furthermore new piping plus ribbons on the leg and back. Damaged seams have been mended, and reinforcing little brown patches were placed at weak points. Two braces buttons each backwards and forwards are an individual element. The tight leather pants demonstrate even to slim people, which special feeling leather produces on the skin. After buzzing days of shooting, that photo model again enjoys long idleness. 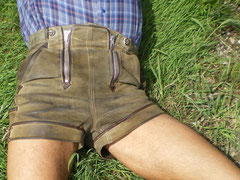 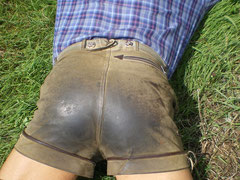 A late keeping up with the affluent among my schoolmates who owned expensive green smooth leather trousers in the late fifties. Interior and leg turn-up were slightly rough, the outside glossy. Most commonly, these pants had leather pockets, being in terms of solidity much superior to the cloth pockets of standard leather pants. Boy fists are ready for attack in such deep leather pockets like in boxing gloves. The impeccably clean, scarcely worn pants have been purchased by auction for less than 30 Euros, although leather trousers of this style and quality could easily fetch three or four times that. 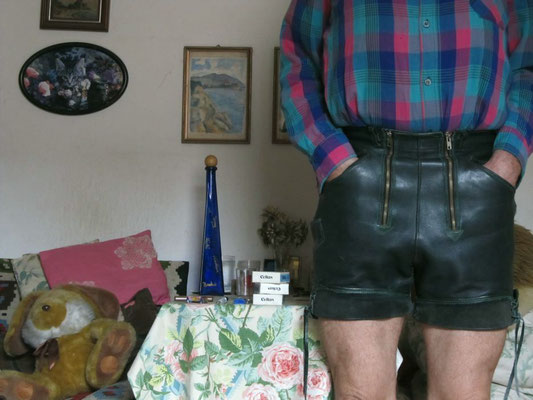 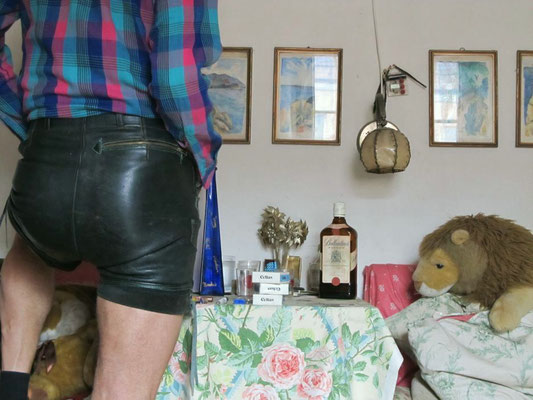 Trousers by Haelson® were and still are considered the Rolls Royce of leather trousers due to their outstanding quality, even though the company has not produced any clothing for quite some time. These knee-breeches, as well a good bargain (20 Euros), required a major overhaul: enlarging, extending, patching up two holes, replacing the zip. The result is impressive.

Once again, the reason of this acquisition is a late keeping up with the boys from wealthy families among my schoolfellows. At my most awkward boy age, I had to go to school in Ulm, Swabia, for two years. There, my Northern German accent had been met with refusal. But one classmate liked me very much. At weekends, he invited me to his family at the countryside. In school, the strong boy became for me a kind of bodyguard.

As he was very bad at German, I brought him up to speed and saved him having to repeat class. Almost the whole year he wore knee-breeches of thick black split leather, red knee-length wool socks and black shoes with lateral lacing. Thomas was always polite and red-cheeked like a ripe apple. We never argued, which is unusual among boys of that age. 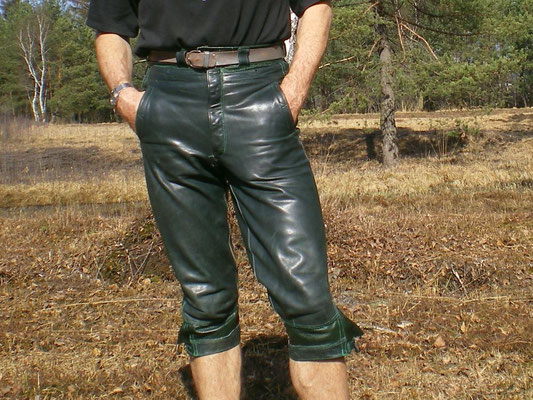 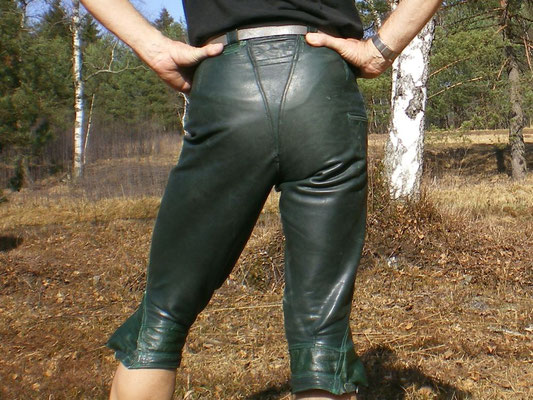