My father possessed a Leica for 35mm film since 1935. He was an amateur, but as an engineer also very interested concerning the innovations in his hobby, especially the technical progress of light-sensitive emulsions. In 1945, shortly after the war, the precious Leica had inevitably to be exchanged against profane things like coal and food. That limited my photographic heritage to my father’s broad knowledge, an enlarger from Leitz, and a complete set for the processing of panchromatic film and paper.

For my 11th birthday, I got my first camera, an Agfa Synchro-Box for roll film, 6 x 9cm / 8 images. At Christmas it was replaced by the famous Agfa Clack. Two years later, I obtained a simple model for 35mm film with the fantastic name Explorer. With the image format 24 x 36mm I became independent from chemists and their modest labs. My lab was even more modest. But it was my own. After I had practiced using developer, vinegar solution, and fixing salt, I said goodbye to the chemist’s offers of paper with typical vintage deckle edges, which I did not appreciate.

In 1956, my work with lights and darks of a picture started with this box

When I lived and worked in Southern Europe, I used every spare moment to travel through France, Spain, Italy, North and West Africa. Mostly alone, but always with a silent companion in the shape of a Yashica SLR camera.

Under some conditions, a 135 mm telephoto lens is useful. It's not really my medium. In lonely spots, sometimes I felt as a highwayman photographing someone from behind. In a crowd, I felt like a thief stealing from a distance. Anyway, even now in the digital age, I keep the Yashica and the Zoom as a kind of relic. It has captured many intimate moments. 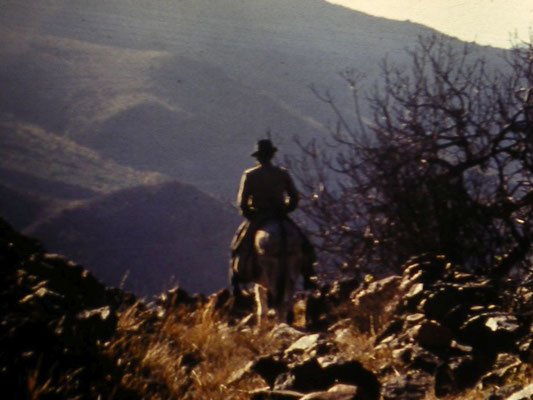 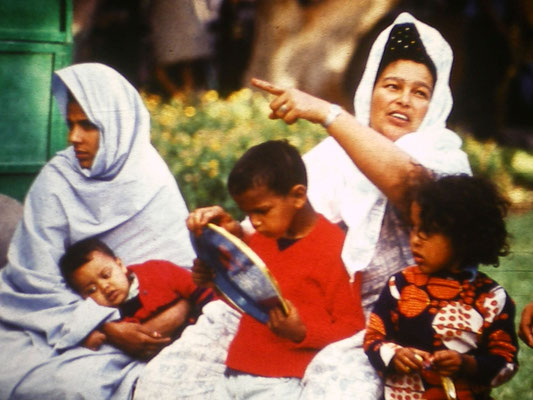 Later on, when I worked in Ibiza for many years, I finally owned the typical equipment of an amateur photographer of the seventies and eighties: an SLR Praktica from VEB Pentacon, Dresden, and a Pentax from Asahi Optical, Far East. Both cameras were basic models with a 50mm lens. I used panchromatic 35mm film 25 ASA, available by the metre from Agfa Munich, as well as colour negative film and film for colour slides 50 ASA from Agfa Wolfen and Kodak. The Black-and-white development took place in my own laboratory in Santa Eulalia / Ibiza. I used photo paper with a matt surface from Ilford. The colour images were developed in professional labs.

The paintings on display (Secret Lives Gallery, Ibiza D’Alt Vila, 1978) were made in sizes ranging from 20 x 30 to 30 x 45cm. Today’s avatar photo of my website was made in 50 x 75cm. At the opening event it was the second picture that Phyllis, owner of the gallery, provided with a red dot – sold!

The first one would be a bit delicate as avatar for a homepage that mainly deals with literature. Don't be surprised about specialities among the pictures like short German lederhosen. Or handcuffs and other restraints. All these things sometimes function as tricky minor characters in my novels.